Development is frozen so not all features are up to date

Voyant's existing conferencing solution was bundled as part of a white-labelled reseller instance of Broadsoft Unified Communication (UCaaS), built and distributed by Cisco. The need for a replacement was escalated by Cisco ending support for self-hosted reseller instances in favor of cloud hosted, cutting out our margins. Different components of the application had different end-of-support road maps, the first to loose support was the conferencing component named Broadsoft Collaborate

A replacement for Broadsoft was paramount to the survival of the business. Voyant's reselling of Broadsoft accounted for almost 50% of our business, or roughly $30 million in annual revenue. Given the scale of the revenue it was decided that a full replacement UCaaS solution would be built.

With a tight time frame product leadership decided to take a modular approach. In the short-term the application could live as a feature inside of Broadsoft with a Long-term transition plan to live inside our new in-house UCaaS solution. However, depending on the speed of our UCaaS developers we could have skipped the short-term plan. Finally the product team was leaning towards selling the application a stand-alone product.

Jitsi Meet allows us to leverage their Web Real-Time Communications (WebRTC) front-end functionality, while transmitting audio in the back-end over our own telecom network.

PSTN Dial-In via the Inteliquent Network

Leveraging our parent company's telecom network allows users would be able to dial-in via a traditional phone line.

With no clear context on where conferencing should live, I directed the focus of my research on the commonalities between the possible product scenarios. Conferencing applications vary in how users are organized, how users are invited to and join a conference. However, in-conference experiences are consistent across different application contexts.

Without the financial or time resources to recruit external participants we asked our colleagues to fill is as research subjects.

Insight: Users responded to social pressure to turn their cameras on

Insight: Users are distracted by their own camera feed

Hypothesis
User's are concerned about their appearance
UX Solution
Reduce the size of a user's own camera feed to reduce distraction.

The ability read and project non-verbal communication across the room contributes to the ease of participation during in-person meetings.

Hypothesis
We hypothesized that the grid view would be the most effective layout to allow participants to communicate non-verbally.
Control
The active speaker view was our control because we had to design it anyway. It's an effective layout for screensharing.

Script Scenarios
Start with your audio and camera on, what do you do with your conference?
Voyant's Solution 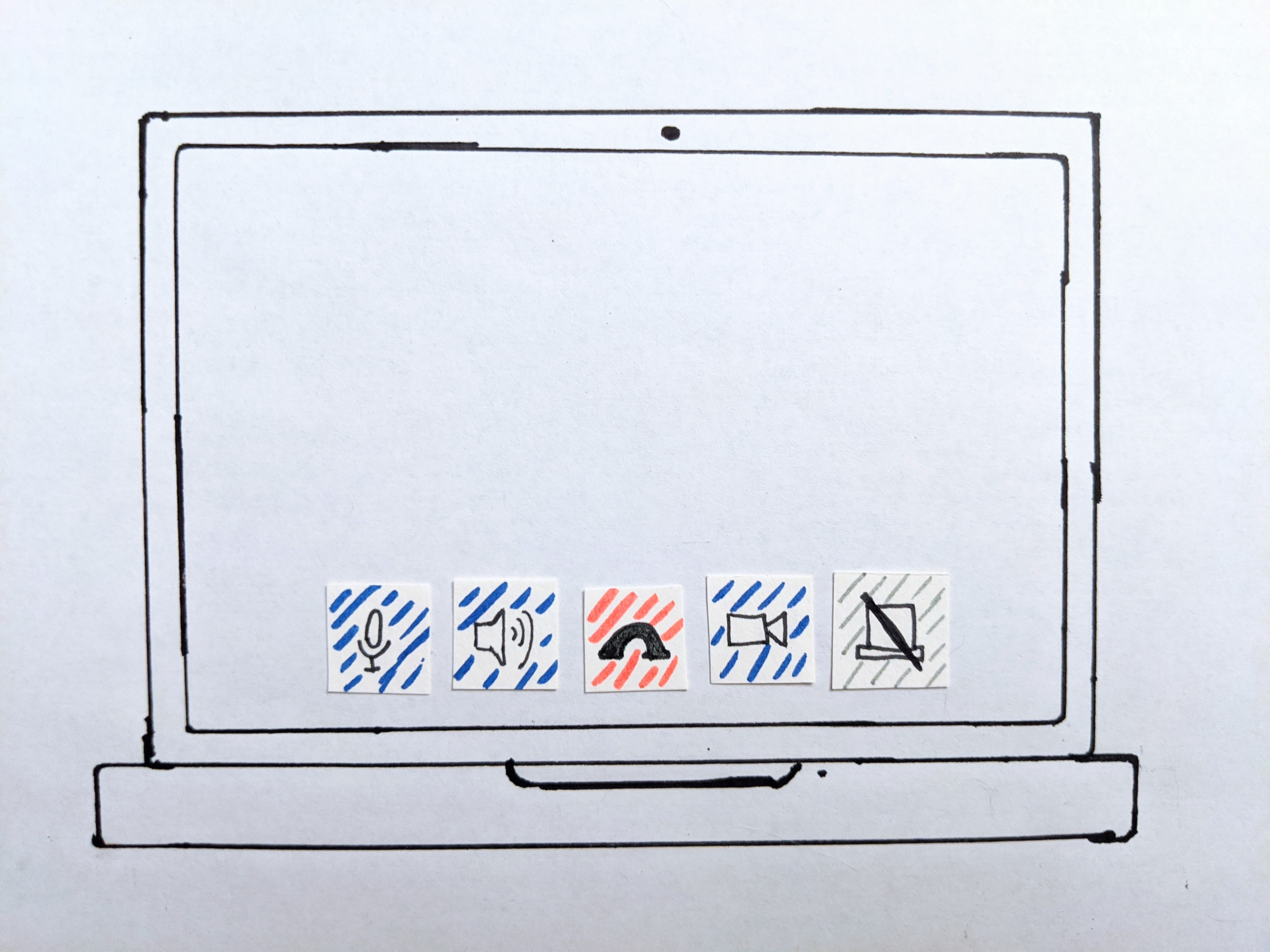 "I like how audio and video controls are divided" 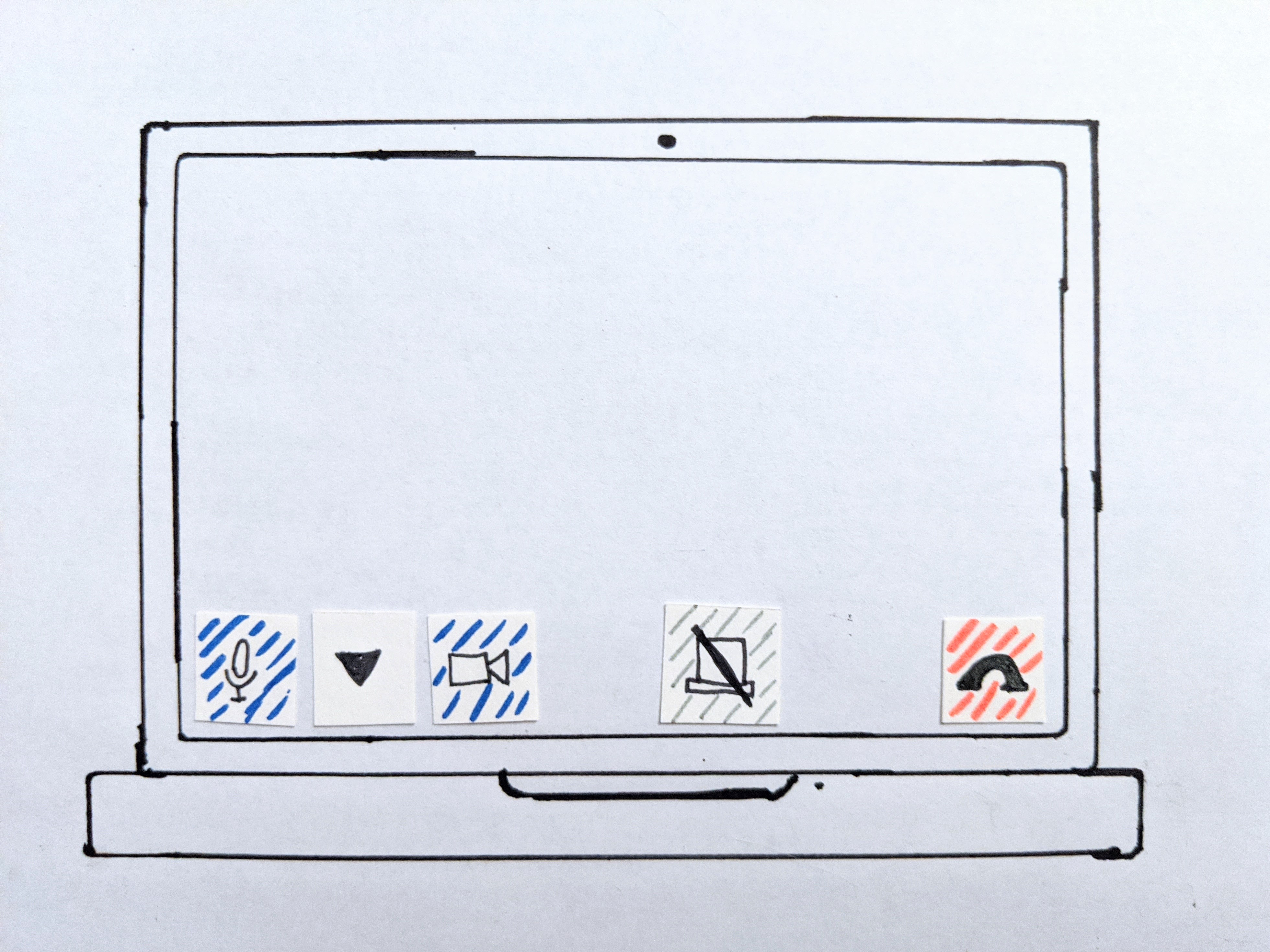 Conferencing interfaces can become very cluttered as features are added. However, the vast majority of participant's time is spent in conversation rather than using the controls. When the app detects no cursor movement it will hide the controls, allow the participant to concentrate on the conversation.

This speaking indicator design works on both users in the video grid and users in the audio sidebar. It doesn't block anything by existing entirely in the margins between participants. It could react to volume and duration.

Find the grid arrangement with the largest area per item

Number of Participants in the Grid